Donald Trump blames Barack Obama for giving Iran the cash to buy missiles flung at U.S. bases—as he offers to 'embrace peace' and claims Tehran is 'standing down' but warns of 'hypersonic weapons' and 'lethal and fast' attacks

Donald Trump blames Barack Obama for giving Iran the cash to buy missiles flung at U.S. bases—as he offers to 'embrace peace' and claims Tehran is 'standing down' but warns of 'hypersonic weapons' and 'lethal and fast' attacks Donald Trump blamed Barack Obama on Wednesday for supplying Iran with the money to purchase a torrent of missiles fired at American military positions Tuesday night.

'The missiles fired last night at us and our allies were paid for with the funds made available by the last administration,' he said, citing $150 billion in frozen assets that the previous president released and $1.5 billion flown by the U.S. to Tehran.

He began his speech to the world on Wednesday with a familiar ultimatum, even before saying 'Good morning.'

'As long as I am president of the United States, Iran will never be be allowed have a nuclear weapon,' he said.

And Trump backed up that vow with a threat:

'Our missiles are big, powerful, accurate, lethal and fast,' he said, sending a warning in nearly the same breath as an olive branch.

'Under construction are many hypersonic missiles,' he warned, standing amid a tableau of stern-faced military leaders.

Minutes later he offered an olive branch, urging European nations to make 'a deal with Iran that makes the world a safer and more peaceful place' and allows Iran to explore its 'untapped potential' as a mainstream trading partner.

'We want you to have a future, and a great future,' he told Iran's people, claiming its military 'appears to be standing down.' 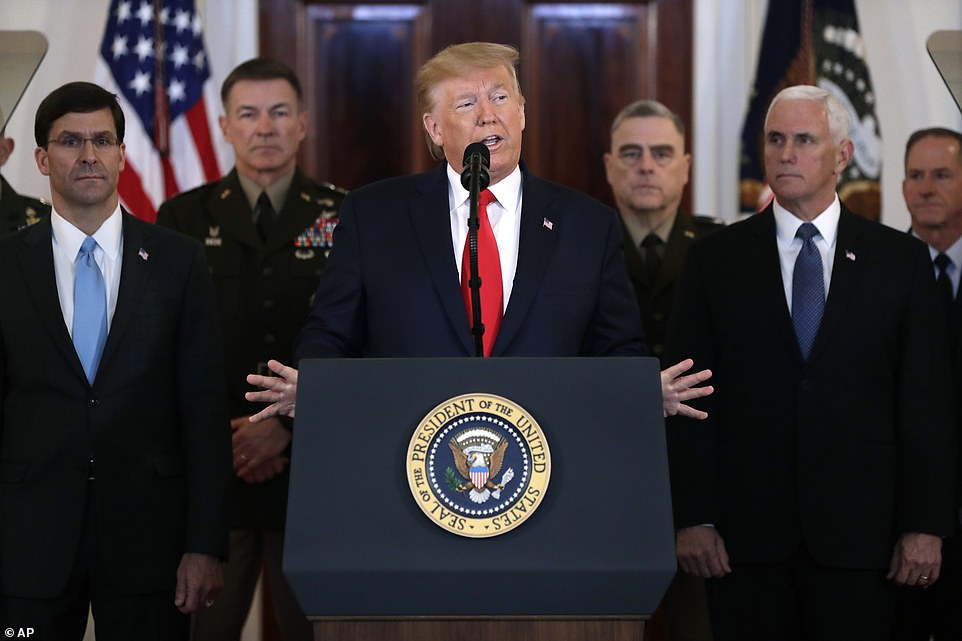 President Donald Trump delivered a high-stakes address to the world on Wednesday, offering Iran peace if it abandons its nuclear ambitions but also threatening the use of hypersonic weapons if war follows 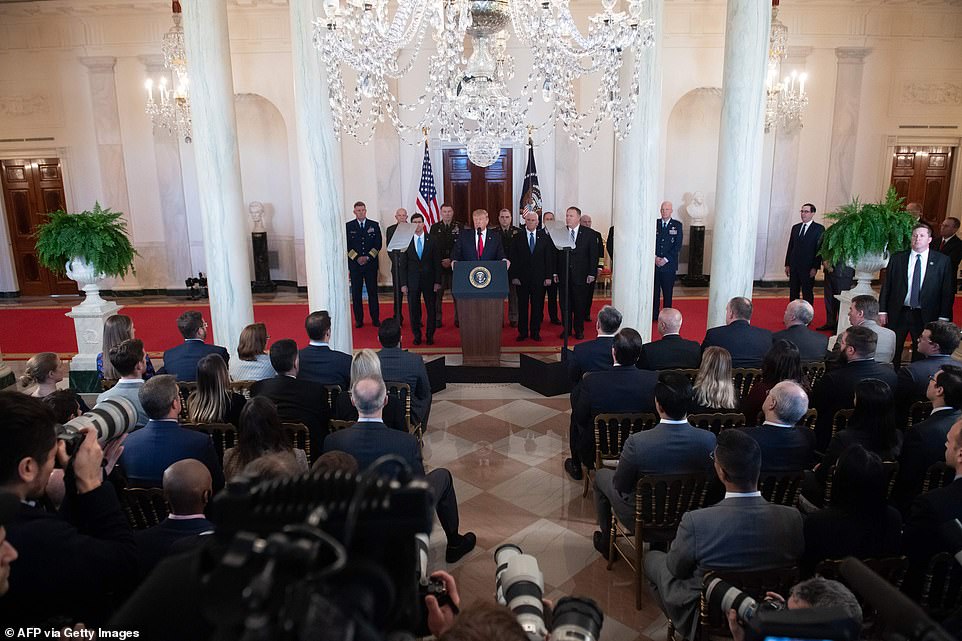 Talking peace and war: Donald Trump offered to 'embrace peace' with Iran if it gives up its nuclear ambitions and its terrorism - but listed U.S. military capabilities 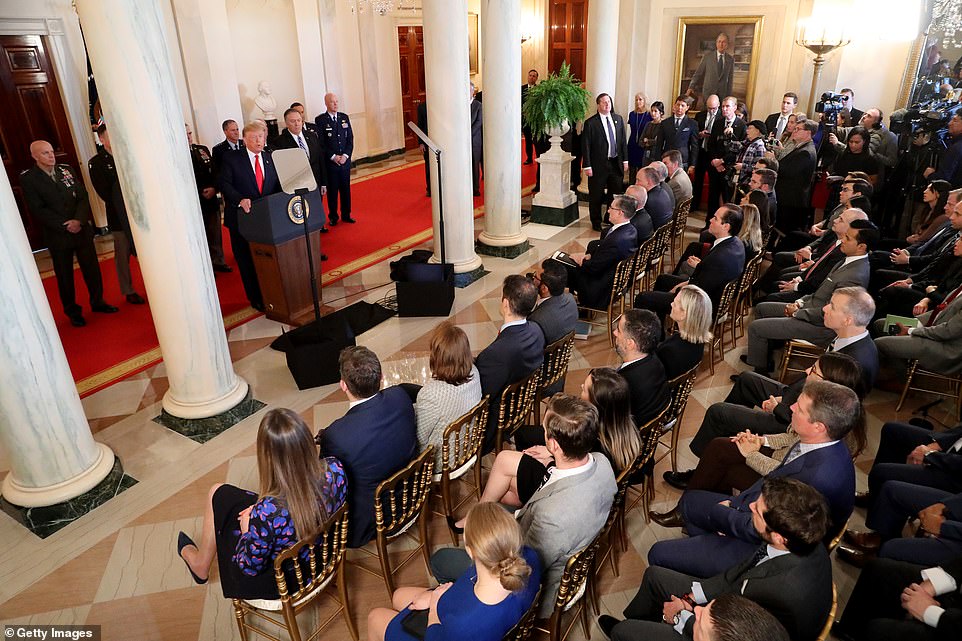 The president spoke in the Grand Foyer of the White House, speaking with the aid of a teleprompter in measured tones 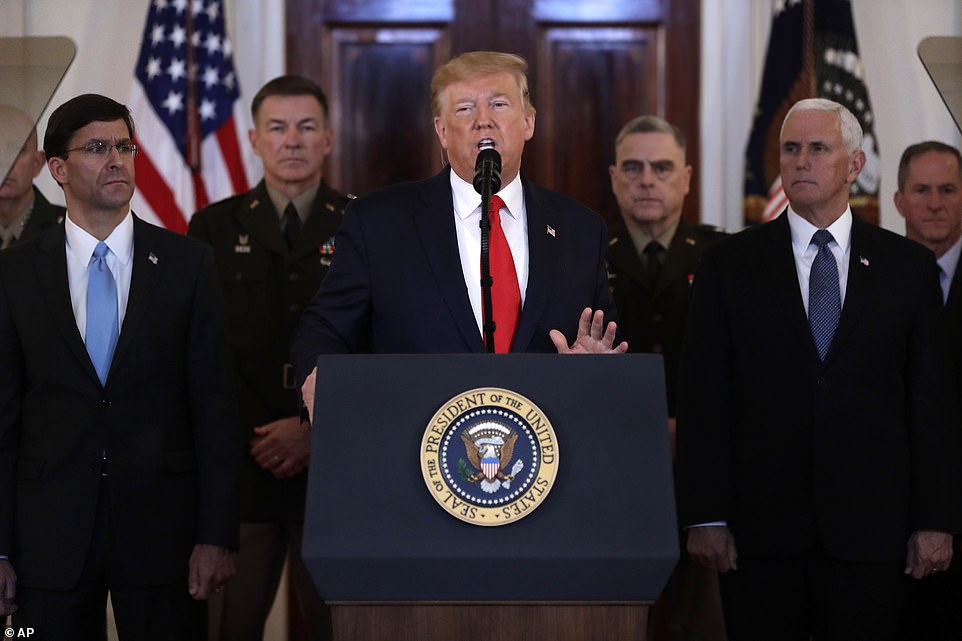 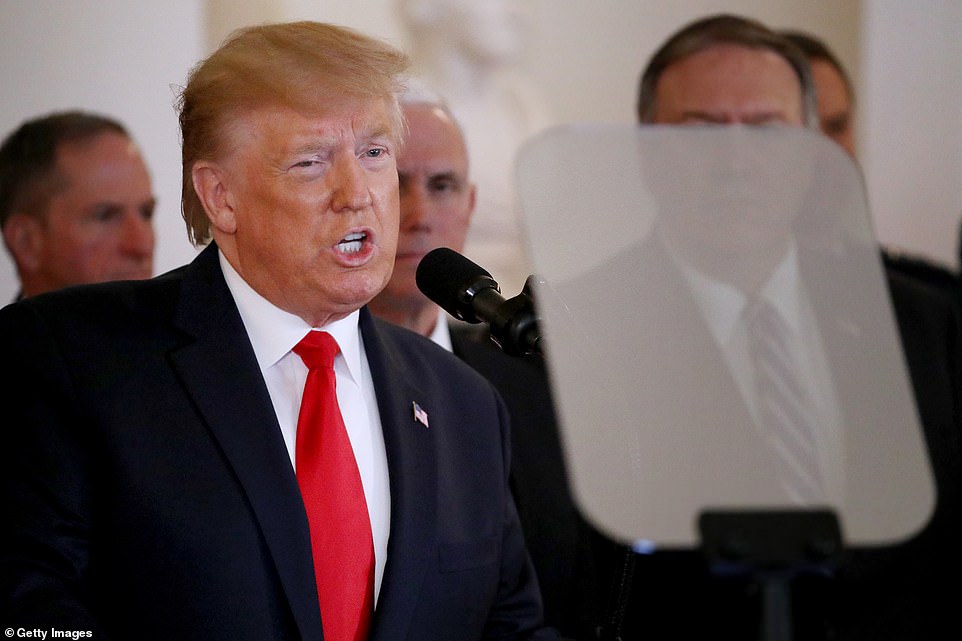 Tightly-scripted: Donald Trump stuck to the teleprompter version of his address to the nation about Iran 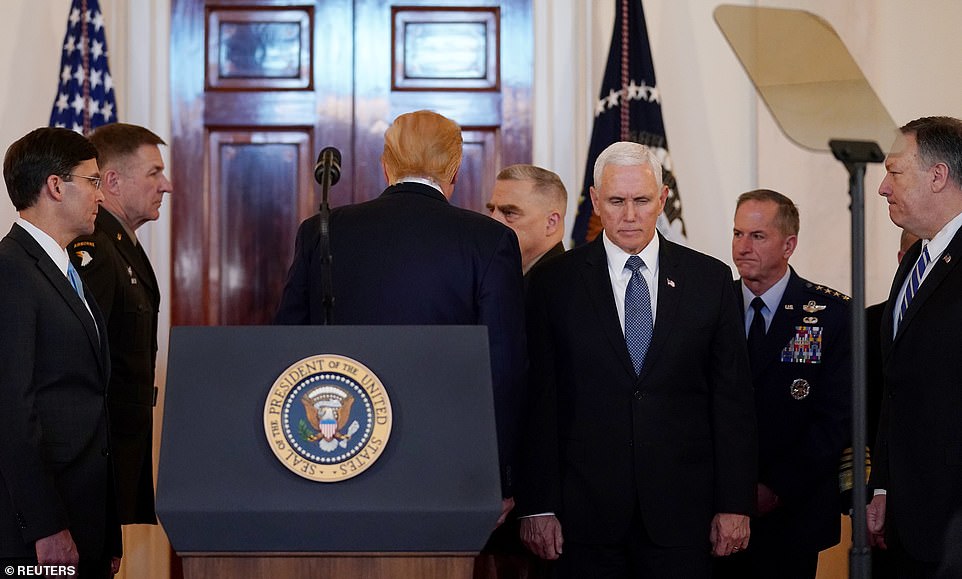 No questions: Donald Trump left without taking any questions from reporters who had been brought into the room before his speech 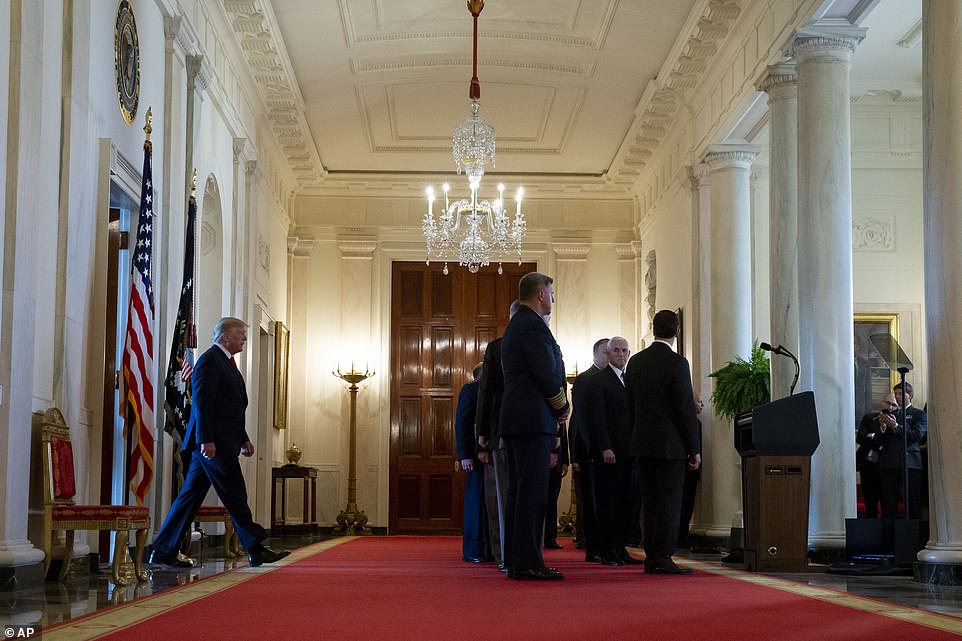 Television entrance: Donald Trump enters to address the nation in the aftermath of missile strikes by Iran on a U.S. base in Iraq 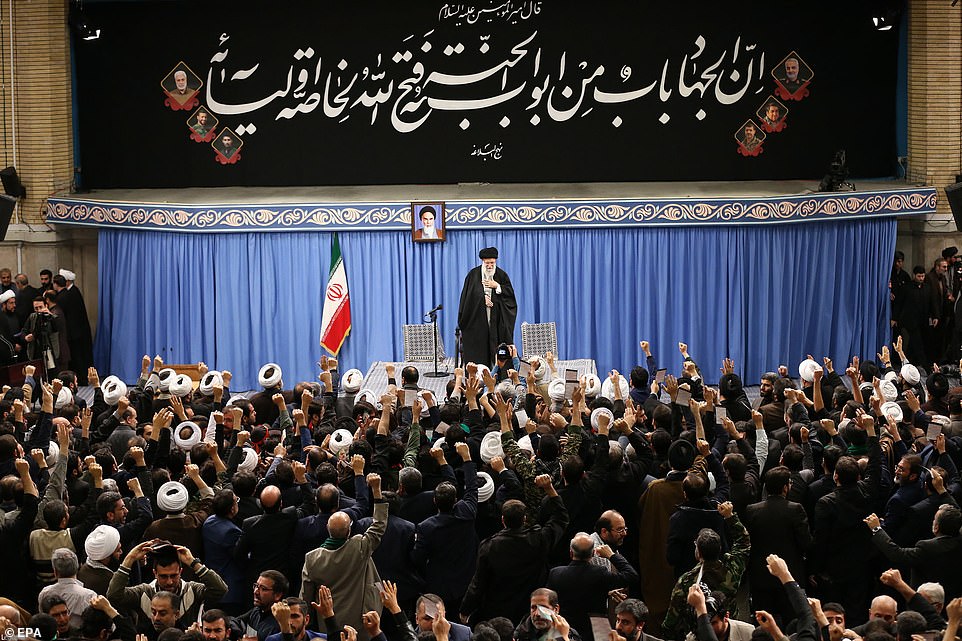 The president's audience-of-one was Iran Supreme Leader Ayatollah Ali Khamenei, the iron-fisted theocrat who is the mortal enemy of Israel and the United States

His remarks, watched live around the world, came after Tehran's armies rained missiles down on Iraqi military installations where American troops have been stationed for more than 16 years.

'No Americans were harmed in last night's attack by the Iranian regime,' the president said. 'We suffered no casualties.'

U.S. officials believe the missiles were deliberately fired into unpopulated areas, in what a senior official called a 'heads-up bombing.'

The president spoke with the aid of tele-prompters in the Grand Foyer, the main entrance hall in the front of the White House.

He blasted Tehran's 'destructive and destabilizing behavior' and said the days of Western patience 'are over.'

Trump has long seen himself as a maverick loner on the world stage, unpredictable and unbothered by ruffling feathers overseas.

He boasts that his low approval ratings in foreign countries are an indication that he is focused on Americans' welfare—not the priorities of real and nominal allies.

That approach could be tested as Iran and the U.S. creep toward what some, but not all, in the national security establishment see as an inevitable war.

The White House isn't expecting one, the senior official said Wednesday: 'This doesn't have to end badly, and frankly right now we might be in the best position ever for diplomacy with Tehran.'

As he has in the past, the president trashed the Iran nuclear deal negotiated during the Obama administration along with Tehran and six other powers. He called the deal, which the administration already backed away from, 'very defective' noting that it 'expires anyway.'

He called on other negotiating parties, including Great Britain, France, Germany, and Russia – to 'break away from the remnants of the Iran deal.

At the same time, Trump did not completely foreclose negotiation. He called for a 'deal with Iran that makes the world a more peaceful and safer place.'

Trump, who spoke to reporters but had yet to speak directly to the nation since ordering the killing of Soleimani, called the Iranian general 'the world’s top terrorist,' and said he was 'personally responsible for some of the absolutely worst atrocities.'

'Soleimani’s hands were drenched in both American and Iranian blood,' Trump said. 'He should have been terminated long ago. By removing Soleimani, we have sent a powerful message to terrorists: If you value your own life, you will not threaten the lives of our people,' he added.

Trump announced that the U.S. would impose 'powerful' sanctions on the already heavily-sanctioned Iranian regime. But the White House did not immediately provide specifics. Treasury Secretary Steven Mnuchin was seen exiting the meeting Trump had with top military and security advisors moments before the speech.

'The United States will immediately impose additional punishing economic sanctions on the Iranian regime. These powerful sanctions will remain until Iran changes its behavior,' Trump said.

The Islamic Revolutionary Guard Corps fired on the Ain al-Asad airbase in western Iraq and Erbil International airport in the north in the early hours of Wednesday, but failed to kill a single US or Iraqi solider.

Ayatollah Ali Khamenei, speaking on Iranian TV shortly after the missiles were launched, described the strikes as 'a slap' and said they 'are not sufficient (for revenge)' while vowing further action to kick US troops out of the region.

But foreign minister Mohammad Javad Zarif said the attack was now 'concluded,' praising Iran's 'proportionate' response and adding: 'We do not seek escalation or war.'

Trump tweeted late Tuesday to say 'so far so good' as American forces assessed the damage and casualties.

Iranian television had tried to claim that 80 'American terrorists' were killed, but that figure was quickly rubbished by Iraqi and US officials.

Images showed several missiles had either failed to explode on impact or else missed their targets.  The remains of one was found near the town of Duhok, some 70 miles from Erbil air base, which was the intended target. 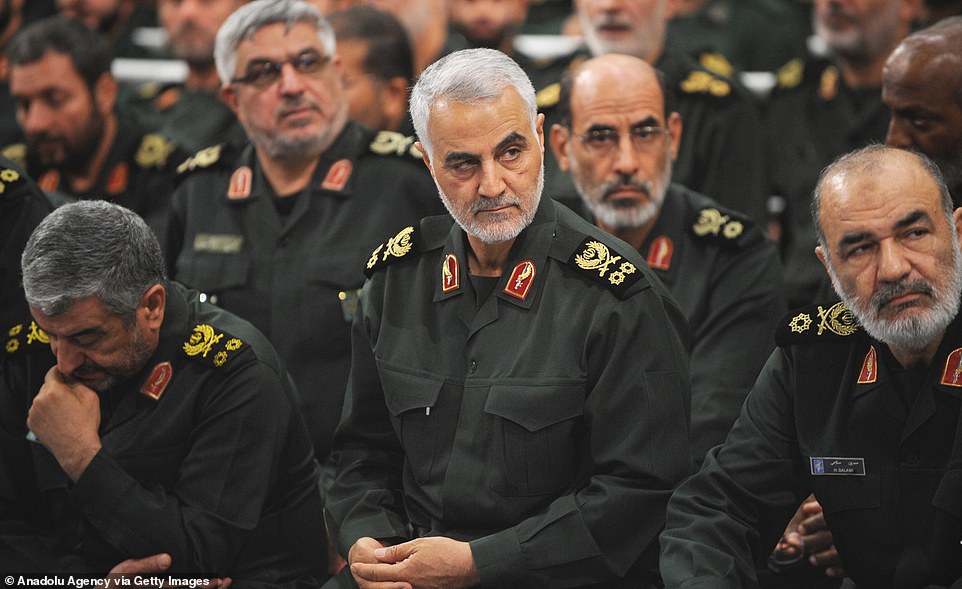